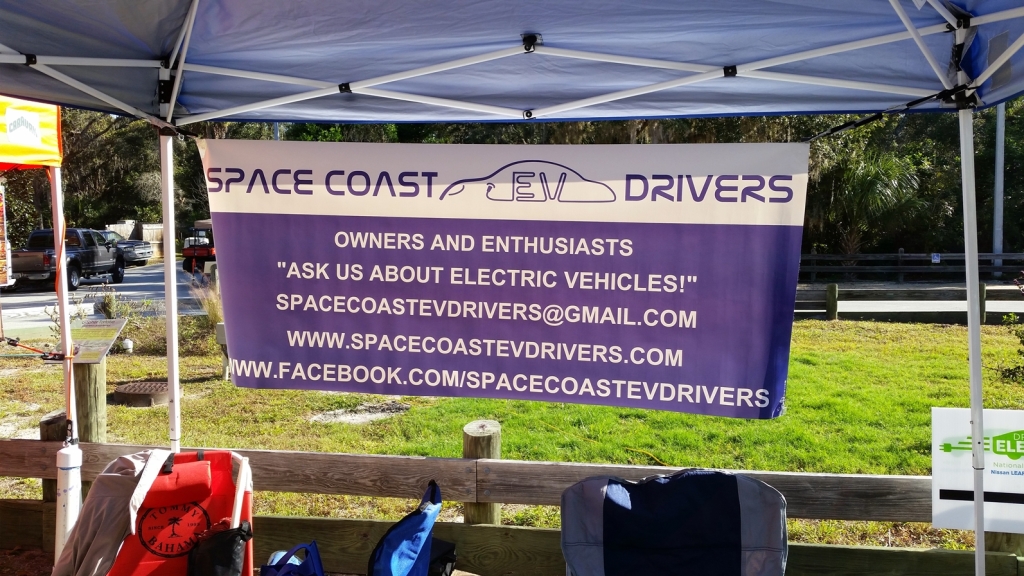 Now that our group’s name is getting out from all of the various events we’ve done and thanks to Florida Today’s coverage of the National Drive Electric Week event we had at Melbourne City Hall back in September we were invited to bring some electric vehicles to two events on the same day!  Luckily our group has grown big enough to be able to easily split the effort and bring enough EVs to each event to show to the public. Both of these events were on Saturday November 15, 2014 – America Recycles Day.  There were lots of events going on all over the country that day to show all the environmental groups, clubs, and businesses that are helping to make the world a little better in that “every little bit adds up” way.  The first event was the Enchanted Forest Sanctuary event in Titusville from 10 am to 3 pm.  This one only had room for two cars so we brought a Chevy Volt and Nissan Leaf to show the two different types of plug in car.  The 100% electric Leaf was there to show people they can completely get rid of their gas bill and add very little to their power bill (especially if you have solar panels on your roof!).  The plug in hybrid EV (PHEV) Volt was there so the public could see that there is an option for those with longer commutes or one car households they could go “mostly electric” then have the backup “range extender” gasoline generator to take the car 320 more miles after the 40 mile battery is spent.  They can then just get another 9 gallons of gas and continue on their journey like a normal car.  There were plenty of people that were interested in both and we were there to answer all of their questions from our owner experience of driving these cars every day for years.

The second event was the Ecoliving Jubilee at Kiwanis Island at Merritt Island from 3 to 6 pm.  We had a large quarter circle area of the parking lot so we were able to bring 12 cars!  There was a great variety to show a large selection of the options to everyone to fit their various needs and commute distances.  We had at least one of the following cars there: Chevy Volt, Nissan Leaf, Tesla Model S, Mitsubishi iMiEV, Toyota Plug in Prius, and a Ford Focus EV.  Even though this was a larger event area there were fewer people that showed up overall.  We were still able to answer lots of questions from the several people that did stop by.  There are a few people that might be looking to buy a new EV soon.  When they do, we hope they’ll join our group and help us all spread the word on the savings and great driving performance we all enjoy in our cars too!