Here’s the report on how the 2012 Chevy Volt fared on a long road trip from Indialantic, FL to Huntsville, AL and back – with a stop in Oxford, AL both on the way up and on the way back for Father’s Day.

We left Indialantic on Sunday June 8 at 9:45 am Eastern time. We got 33.2 miles and 9.7 kWh from the battery before it switched over to the gasoline generator. Not too bad for mixed city and highway driving. 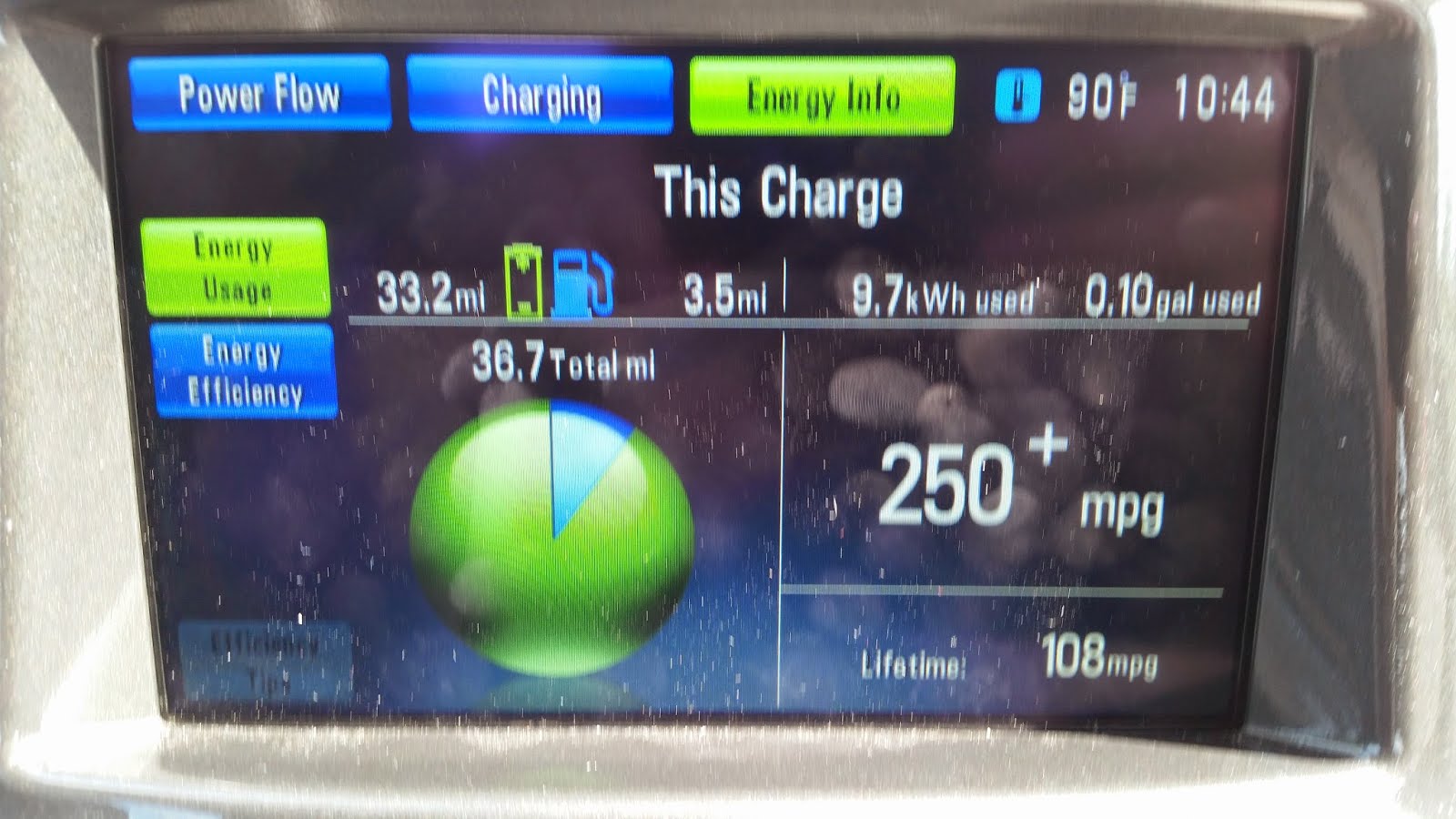 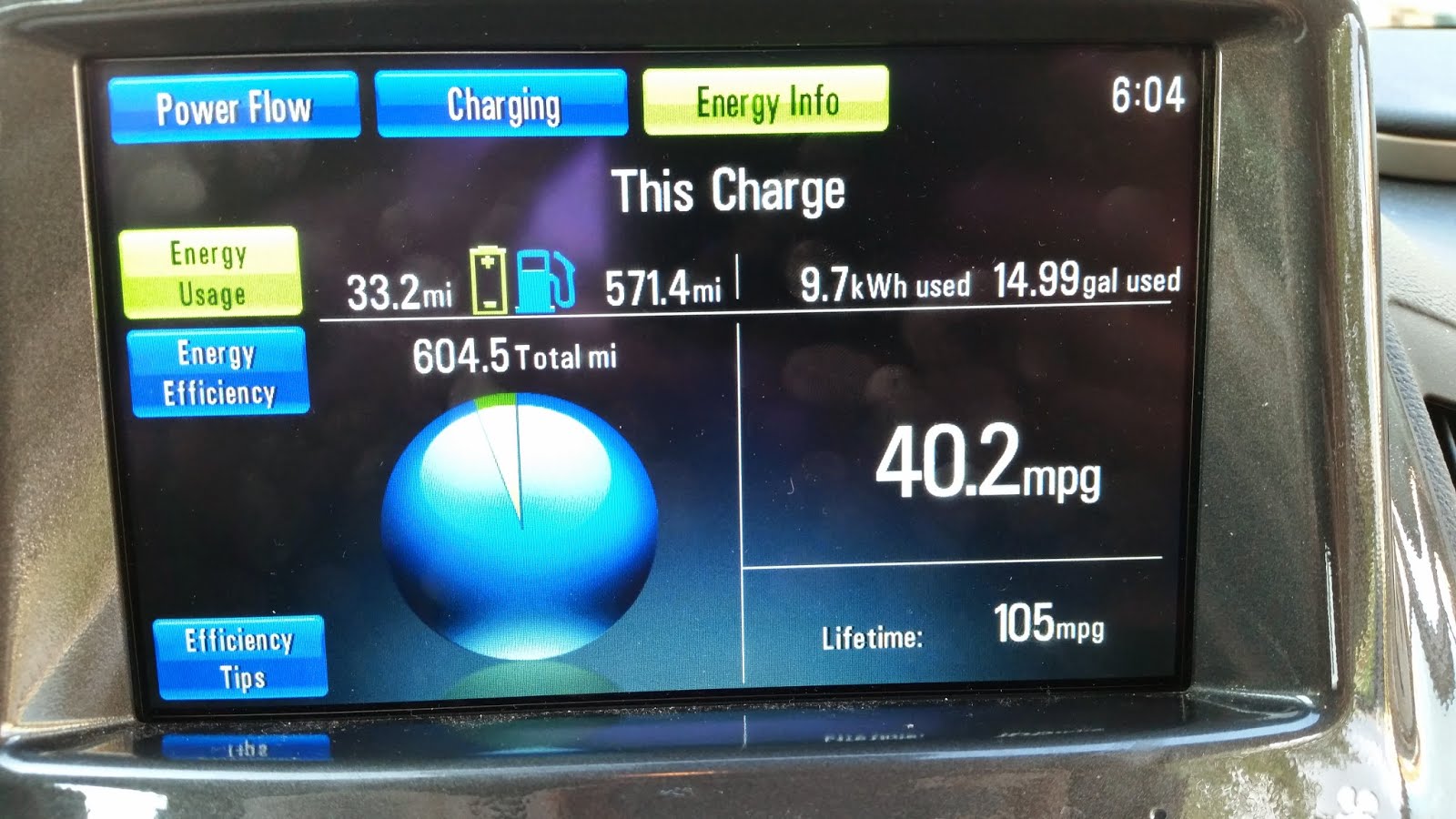 We spent the night at the Hilton Garden Inn in Oxford Sunday, Monday, and Tuesday night.  We picked this hotel as we know they are plug in friendly. Every night they allowed us to plug into their outside 110v outlets so we’d have a full charge to drive on each day. Their only restriction is that you can not obstruct a walk way and there are only about 10 spots that do not have a walkway in front of them. 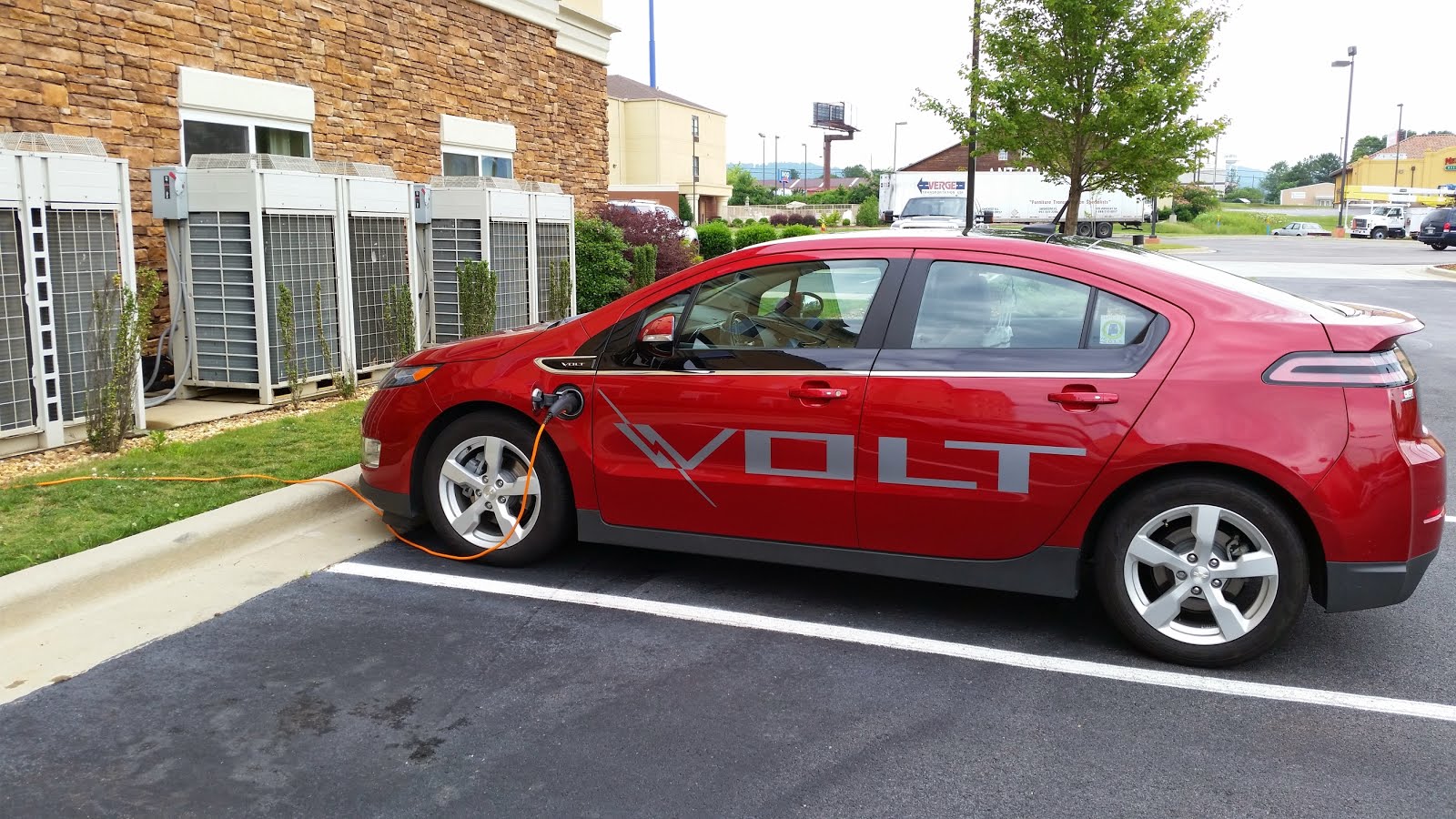 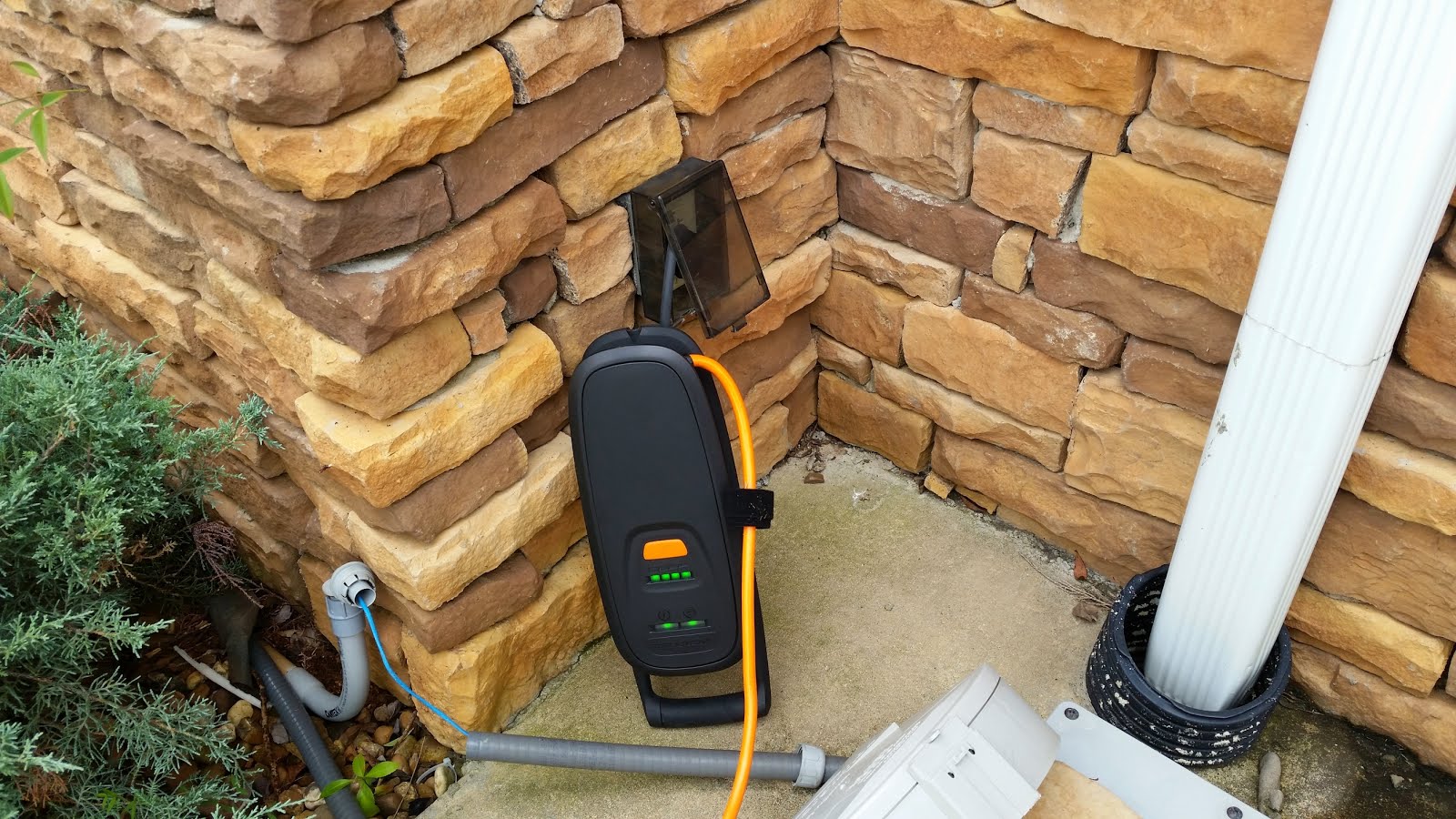 Monday at lunch time the Volt departed on a trip to Birmingham, AL so a mix of city and highway with the first bit on electricity then the range extended gas generator.  With some pre-trip research we plugged up at the McWayne Science Center’s free L2 charger in their garage after the $5 parking fee that applies to anyone parked in the garage.  It had a good two hours to charge over lunch but didn’t fill up completely.  Still it was able to drive a good part of the way back to Oxford on battery power before switching over to the gas generator.

Next we drove from Oxford to Huntsville to stay with a friend in their third floor apartment Wednesday, Thursday, and Friday night. This is where we found the trouble with apartment charging when there are no actual charging stations and limited or no garages. We searched the outside of the building near all the parking spots and couldn’t find an outlet anywhere.  We asked the building manager if it was OK to plug in and if they knew of any outside outlets.  They didn’t know of any.  So we came up with a plan combining an extension cord, a tree, and some  masking tape. We are committed to our cause no? We managed to use our “just in case” 50 ft. heavy duty contractor’s extension cord and plugged it up in the outlet near the balcony sliding doors. Then we ran it outside and down the side of the building so it didn’t dangle in front of the downstairs balconies.  Then we  wrapped it around a tree and through the bushes where we plugged the car up and let it charge. We sealed the sliding door with the masking tape so bugs would not seek the comfort of the pull out couch in the living room with us.  We decided to wake up at 5 am so we could unplug it all before the sun came up in the event of lawn care or any anti EV people. To our knowledge no one knew we even did it.  Since our friend pays her own power bills we offered to pay her the $1 it used in power but she wouldn’t let us pay her.  We did get her an Amazon gift card for letting us stay anyway.

We went to a Pig Roast BBQ fundraiser event held at the Makers Local 256 makerspace and plugged in there twice.  We were able to charge up almost 100% each time so we gave them an extra $2 donation to cover the power we used.  After everyone had eaten and had started cleaning up and getting ready for the LAN party / video game party that night, someone brought a Tesla Model S to show off!  They gave several test rides and let’s just say each and every one of the riders left with the Tesla grin.  I had forgotten how fast it is and how it pushes your face and guts back like a roller coaster you can steer! 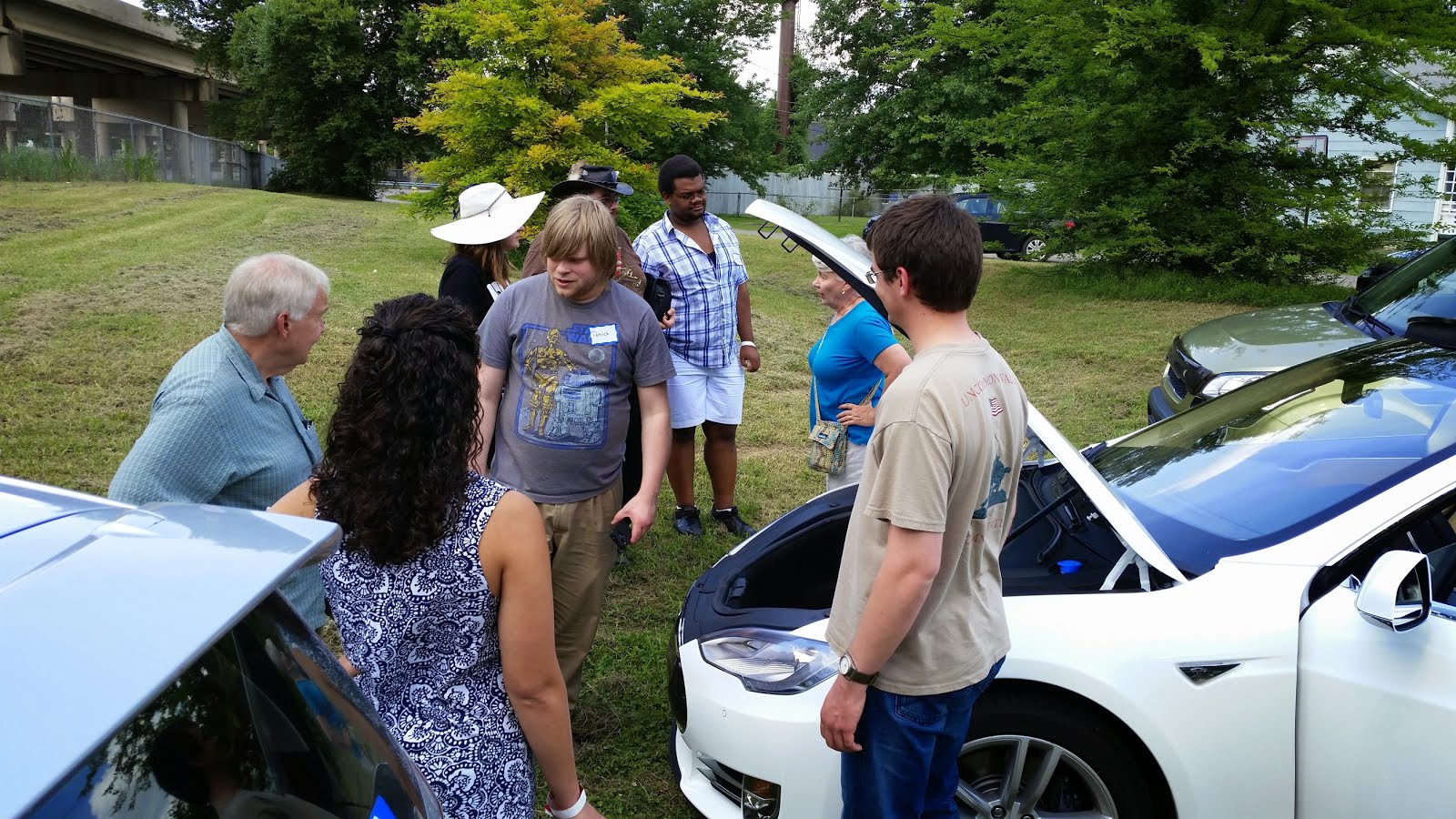 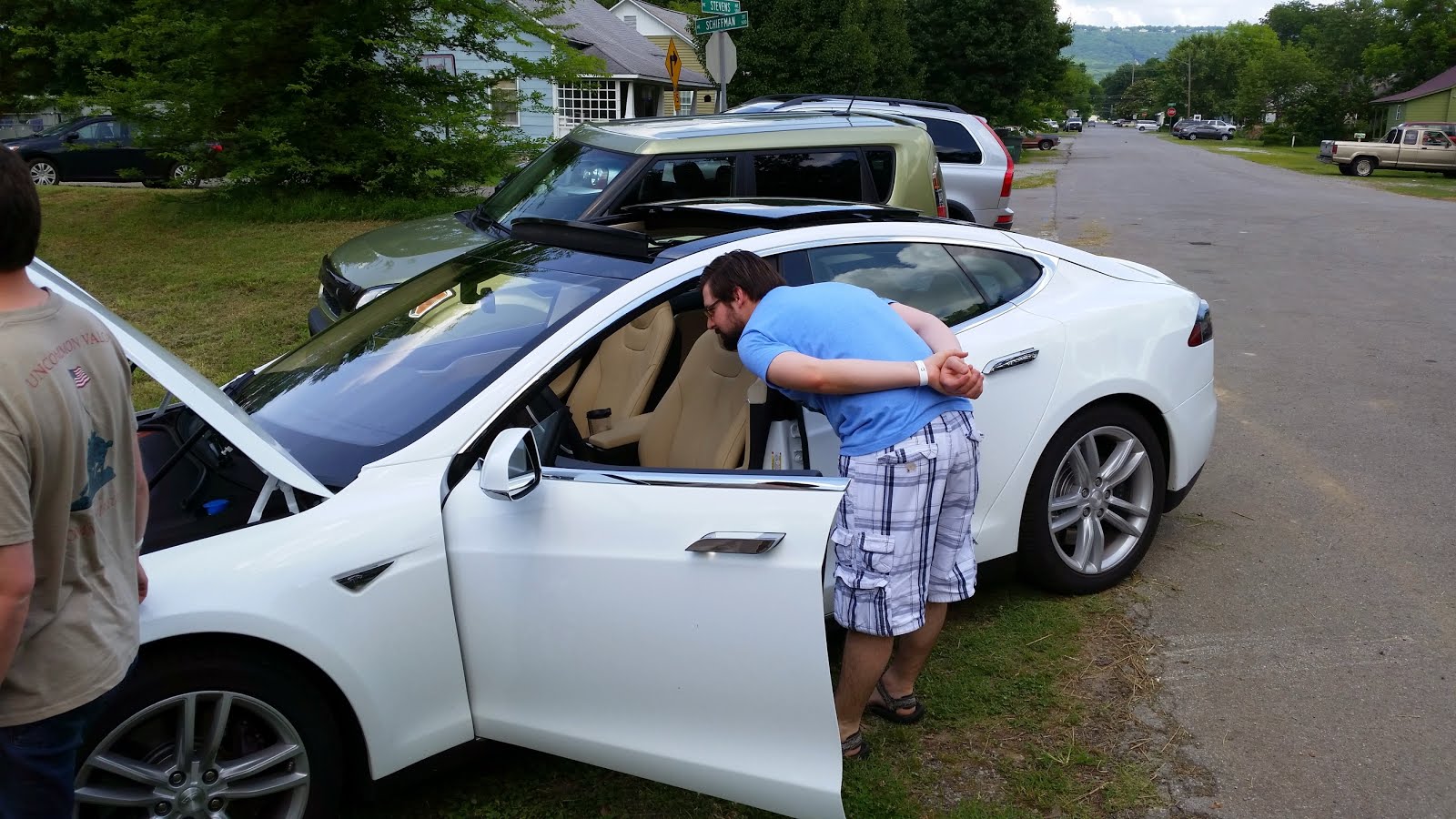 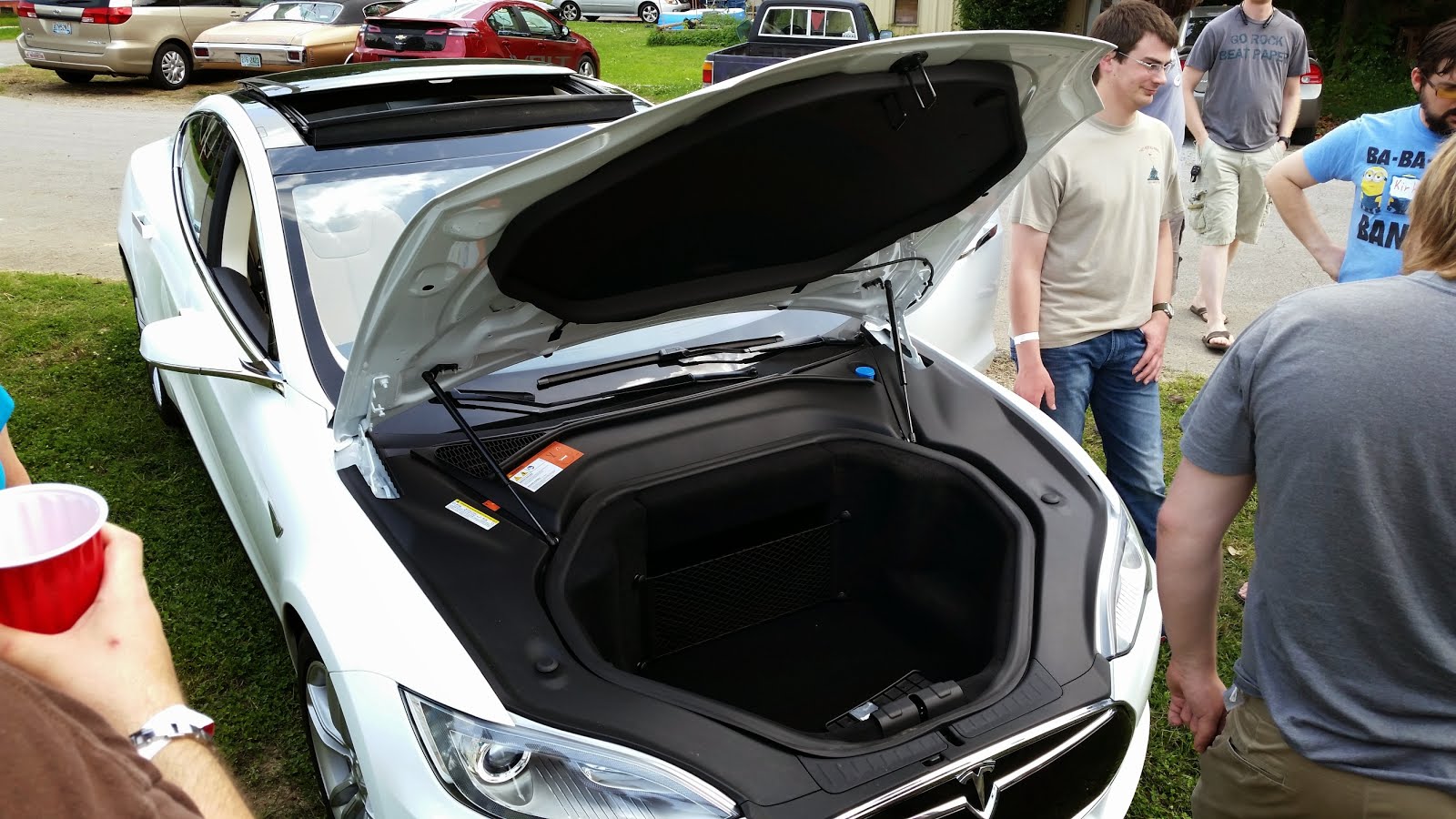 After two weeks of calling every hotel in Huntsville to see who would let us plug in with no luck we stayed in the brand new Homewood Suites in Downtown Huntsville.  Their parking garage is shared by the nearby Publix grocery store and has several 110v outlets directly in front of a few parking spaces.  They would be perfect for an overnight charge for guests that stay in the hotel with ZERO cost for installing actual charging stations.  We asked the hotel if we could plug in but they said the garage is owned by the city so they can’t give us permission.  We would be glad to pay for the power to plug in there but we still need to figure out who owns the parking garage. 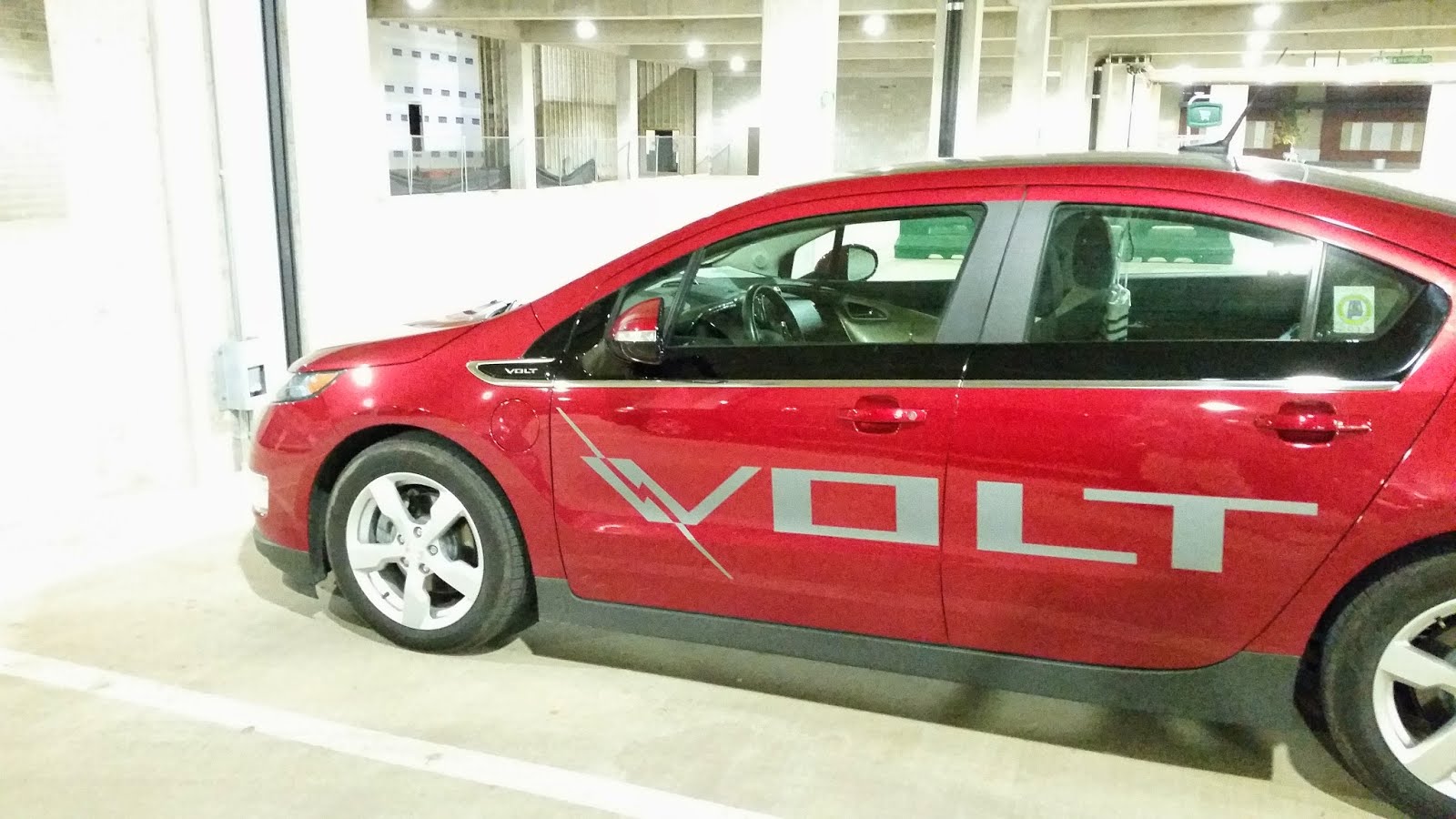 We left for Oxford for Father’s Day first thing in the morning at 9 am and with no charge we packed up and headed out on gasoline.  We arrived right around lunch time and took Dad out for some good food at his favorite place to eat: The Broiler Room in Lincoln, AL.  After a fun fathers day we were back to the same Hilton Garden Inn in Oxford that lets us charge the car in the 110v outlet outside.  We charged it up over night and headed back to Florida first thing in the morning on Monday June 16.  We were able to get a good ways past the Georgia border and back into the Eastern time zone before it switched over to the gasoline generator.  We only had to stop for gas twice on the way back and there’s still plenty left in the tank that should last another two or three months.  We arrived home around 8:30 pm eastern time and the Volt is plugged up in its favorite 110v outlet in the garage.  It will have 100% charge before we wake up in the morning ready for another few months of gas free driving around town here in FL. 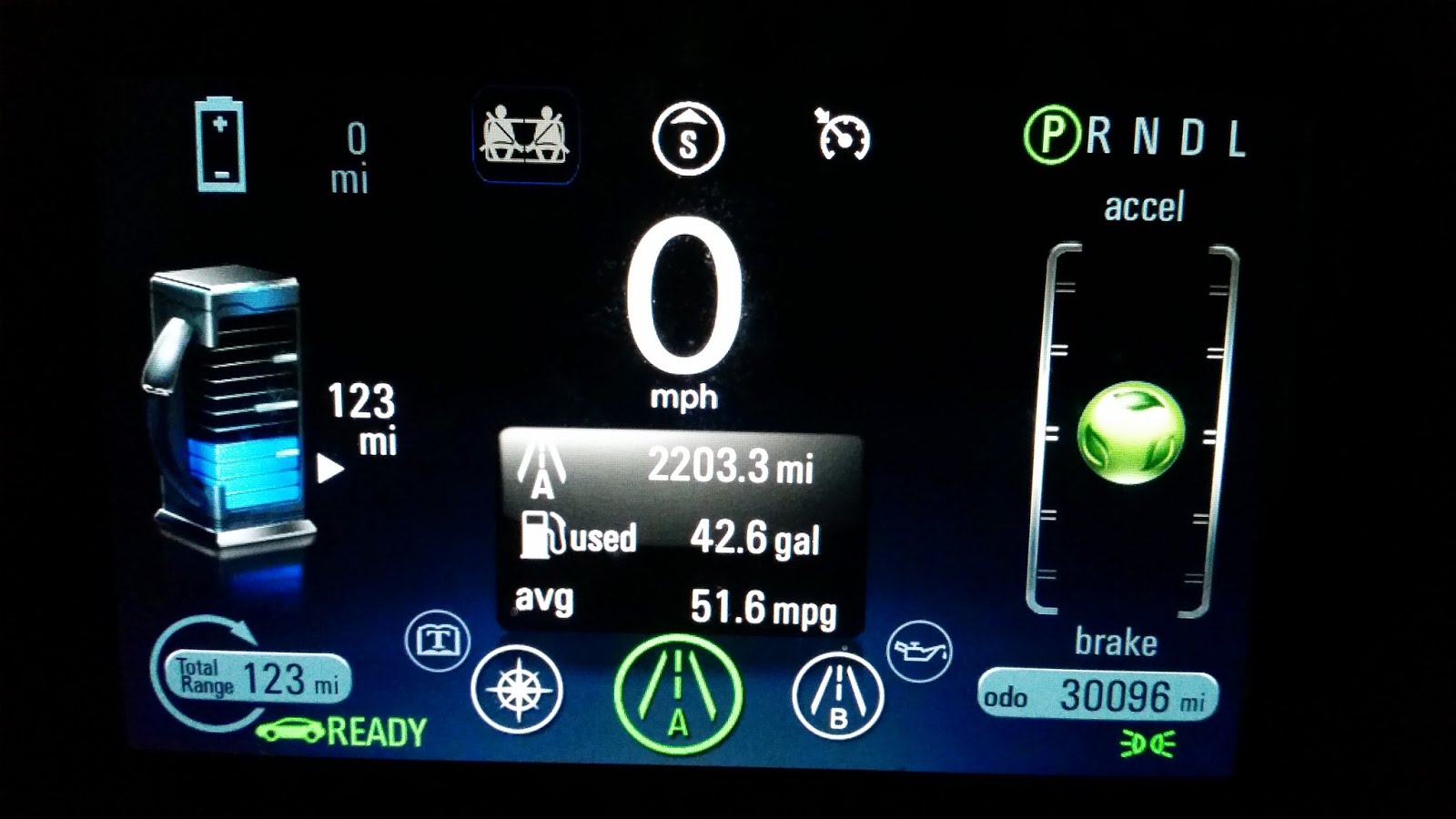 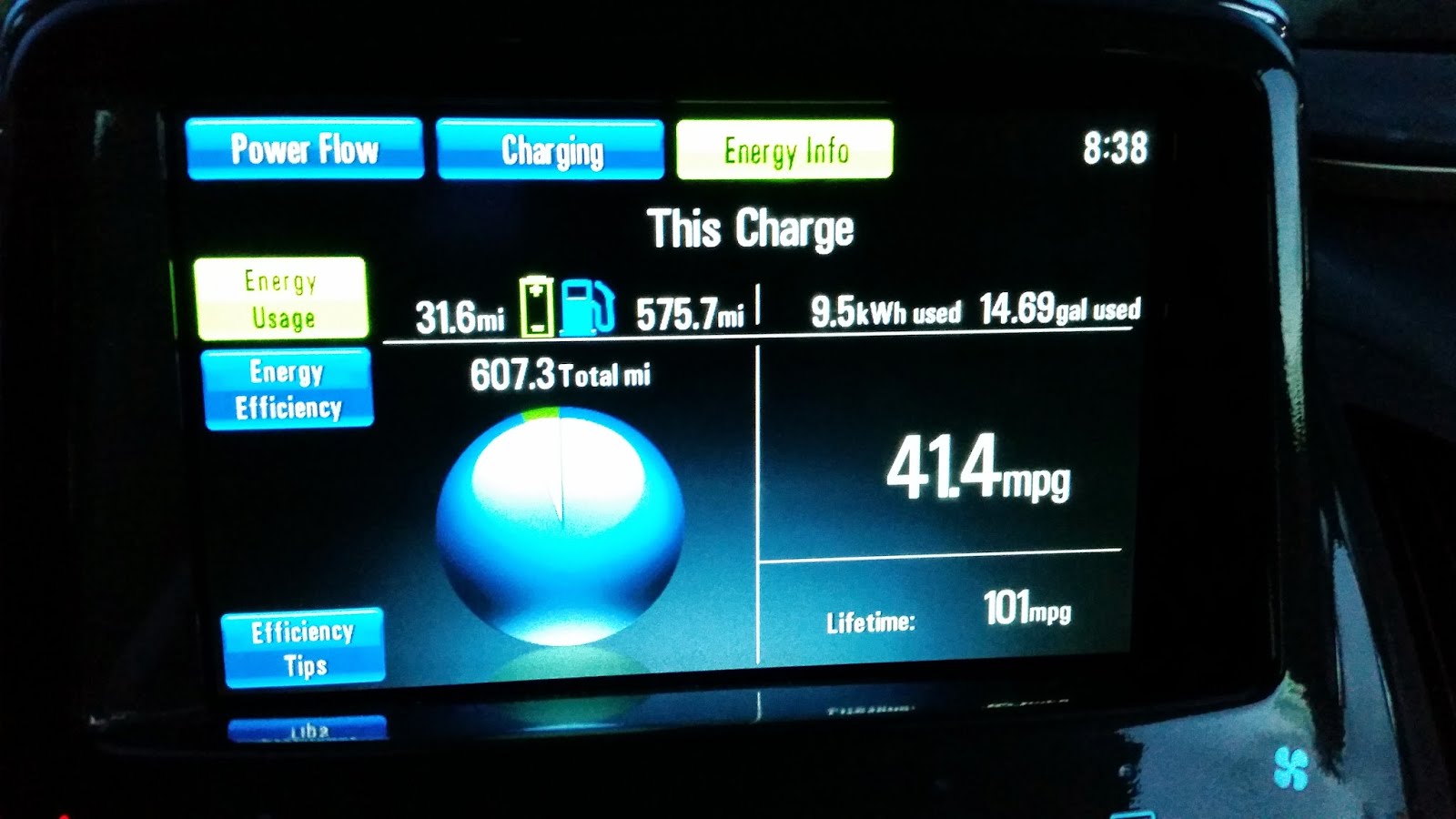