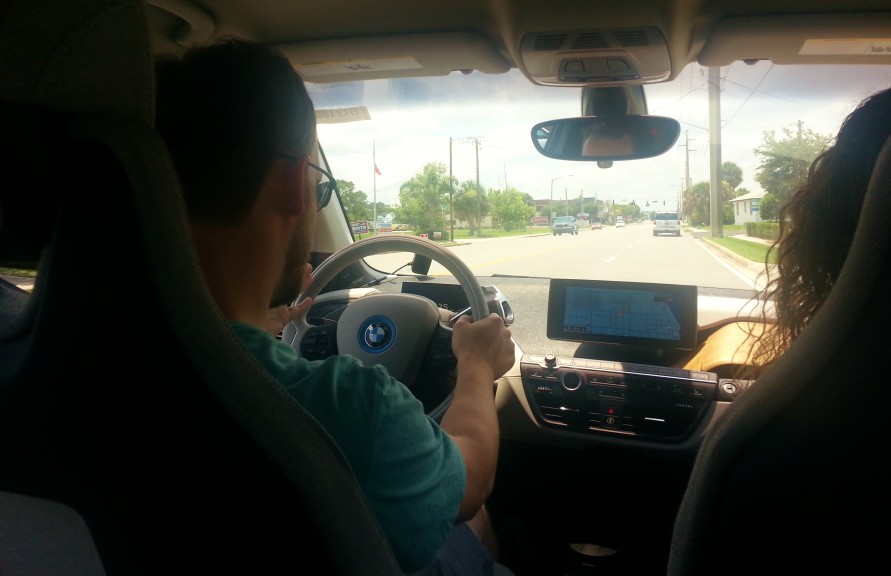 As most of you know if you are lucky enough to live on Florida’s Space Coast Saturday was beautiful. Not one afternoon shower or storm, a rare thing for the summer months. Josh and I were out and about and we figured it was as good a time as any for a BMW i3 test drive. Since we are due for a new vehicle in December and it has to be electric we wanted to compare the i3 with the 2012 Volt.

When we arrived we were able to plug up the Chevy Volt in BMW’s Chargepoint Level 2 charger for free while we talked with the client advisor and drove the i3REX around the block.

At first sight the i3 looks great on the outside but on the inside we quickly noticed the exposed fiberglass interior trim.

It is very “eco” looking, and while it goes with the other fabrics it seems like they could have put some kind of gloss or light resin over it.  Immediately I was poked in the hand by a stray fiber while getting into the back seat, a minus for the i3. The back seat area was roomy, but the lack of center arm rest left me wanting and getting in and out was a bit uncomfortable due to the position of the door handles.

The interior electronics are quite advanced and they kind of make you feel like you are driving a space ship.
If you have ever had a BMW with iDrive the “puck” controller is the same. If not, it’s pretty easy to navigate the screen and go through all the options like radio, navigation, Bluetooth audio, satellite radio, and selecting “profiles” for different drivers. But it’s not on the same level as a touch screen like most of us are used to.

Our advisor didn’t know much about the i3 as it was only her third month on the job so in true enthusiast fashion we took the opportunity to educate her. We compared it to the Volt in the way it drove and how it felt during stop and go traffic. The big difference we noticed immediately when starting the drive was the high regenerative braking that slowed the car down as soon as you let off the gas pedal. It was very similar to the Tesla Model S. In the Volt you have to shift from D to L on the “gear” selector to get that kind of regen and I think even in L the i3 is a bit stronger.  We asked if that was a selectable option on the i3, like the Tesla but she didn’t know.

The on site i3 specialist was busy with other clients at the time so we were unable to get that question answered as well as some maintenance questions.  Specifically we wanted to know if the BMW i3REX was as smart as the Volt in the areas of automatic maintenance. In terms of space the Volt has a bit more “trunk”. Given that, with the back seats folded down we have hauled  a 24 inch wall oven on one occasion, two large dogs on another,  and two fully assembled beach cruisers on yet another and were still able to shut the hatch.  Even with the back seats folded down i3 is short on that kind of space.  This leaves the volt the clear choice over the i3 if you need more room for storage/hauling.

Since the i3 weighs so much less than the Volt (i3 = ~2500lbs Volt = ~3800lbs) the i3 had a much quicker 0-60 time.  It also seemed to handle bumps in the road much smoother as well, but given it is more of an SUV that was not surprising.  Overall it had a very sporty and nimble ride. We couldn’t hear how quiet the ride was since we had the A/C on full fan but from what we could tell it  on par to most other EVs. There were still 28 miles left on the battery after our test drive so we couldn’t test out the range extender mode though we heard through other reviews that range extender engine sounds like a weed eater or dirt bike.

The main drawback of the i3REX and the one that would keep us from switching from the Volt is the road trips we take once or twice a year.  The range extension on the i3 is in one word, pathetic. The battery lasts about 80-100 miles and there is a 2 gallon range extending gas tank that will get you another 80 or so miles. So on an 800 mile road trip you would do the first 80 miles on battery leaving 720 miles, then 720 / 80 = 9. That’s right you would  stop for gas nine times and you haven’t even driven 1000 miles. This would get annoying and add significant time to a road trip. While the Volt only gets 40 miles or so on the battery you can go another 340 miles on its 9 gallon tank. So you’d only have to stop for gas two to three times, much better for road trips.  Depending on how often you take long road trips the Volt might be better. If you RARELY take crazy long road trips then the BMW i3 would still be a good choice.

In the end the pros of the BMW i3 for us are larger EV range, heavy regen for one pedal driving, fast 0-60 time, smooth ride (sits higher and handles bumps better.) The cons from our perspective are the scratchy feel of the fiberglass interior, the lack of a back arm rest, no touch screen for controls, small about of storage space even including the frunk and the real killer for us insignificant gas extended range. 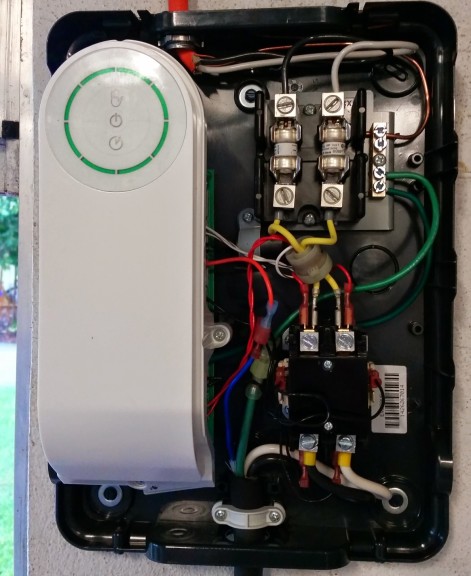 After a short wait we are happy to say that our new EV home charging station is installed! The cost was around $350, the same cost as running a new dryer plug, wire, and breaker.

It took a good two hours to install but most of that time was spent running a new wire up and over the garage ceiling to get it to the side we wanted it on.  It took about 20 seconds to actually connect the three wires inside the EVLink charging station and tighten down the set screws. While we didn’t want a portable Level 2 charger at home we did verify that if we were to ever move we could take this with us by turning off the breaker, unscrewing those three set screws, removing the wires, and capping them off with wire nuts and electrical tape.

The difference in charging speed between a 110v outlet at 12 amps vs. a 240v outlet at 30 amps is night and day! The 110v outlet would put back between 4 and 5 miles of range into our electric vehicle every hour it was plugged in. This new 240v “Level 2” charger gives a charge of 10-12 miles every hour! The difference is amazing for at home charging of EVs. 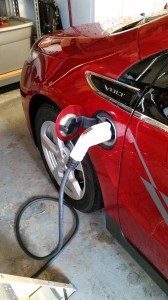 out again. Only now with a Level 2 home charger there will be lots of extra EV only miles to play with. In the short time we have had the Level 2 charger at home it has made a world of difference. If you are considering buying an EV home charging station we have to say it is totally worth it. It took a while for us to decide we wanted an EV home charging station and you can read an earlier post regarding our decision to finally purchase a Level 2 home charger here. For now there will be a lot more “sport mode” going on without worrying too much about running out of EV only miles and using the gasoline backup because while we have the option, we hate to use it if we don’t have to. 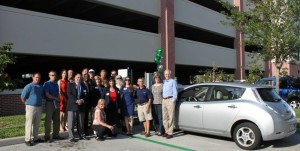 Our first, first Sunday of the Month meet up will be this Sunday May 4 from 2-4 pm.

We’ll plan to park at the level 3 charger at Melbourne City Hall then we can walk over to Meg O’Malleys for a snack while we talk.
We’ll be switching up between the level 3 charger at city hall this month then we’ll met up at the level 2 charger at Eau Gallie Library next month and have our drink and snack at some restaurant around there.
Don’t let me forget to give everyone a few of our business cards that you all can hand out to those interested in EVs or to anyone you see with an EV that still needs to join!
I added everyone to the Google Calendar event so let me know how well that works for you getting the event into your own calendar. 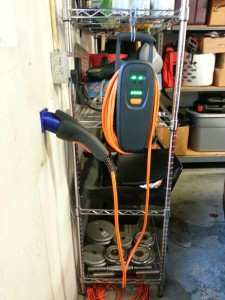 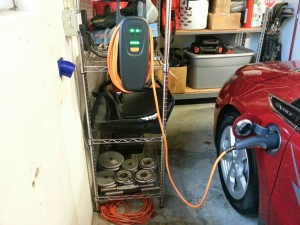 The 3D printed J1772 inlet is now in use.  We simply bolted it to the block wall in the garage with some concrete anchor screws.  Now there’s a place to put the plug to keep it clean, dry and out of harm’s way.  Instead of draping the plug over the charger or hanging it loosely it can stay in its perfectly shaped home similar to a public charging station.  What do you think? 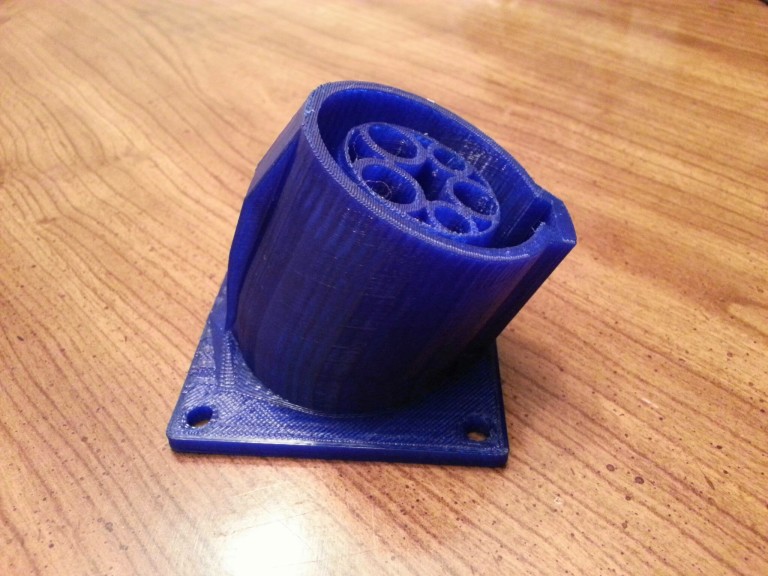 Do you use the portable 110V charger for your Chevy Volt or other EV as your main charger?  Do you ever wonder where to put the plug after you’ve removed it from the car?  Do you just drape it over the charger box or just set it on a nearby shelf?  Do you wish there was a nice spot you could just put the plug in like at a public charging station?  Wish no more!  With the advent of 3D printers you can now simply download this plug holder and print it out in hard plastic.  Then just bolt it to the wall near the charger and you can plug it in just like you’ve always wanted.  Take a look at the pictures to see it in action.  Leave us a comment if you wanted one of these and/or would use one.  And if you have a 3D printer this is the link to the file I used to print it:  http://www.thingiverse.com/thing:153449 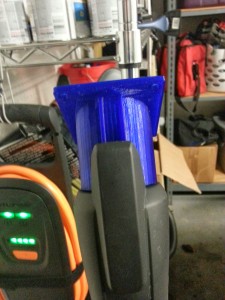 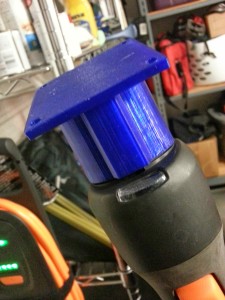 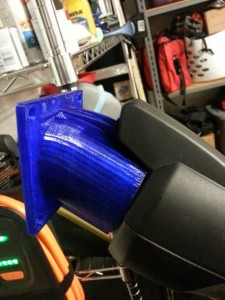 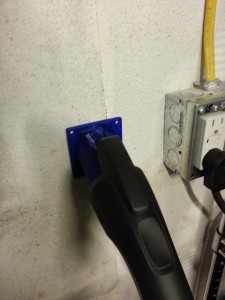 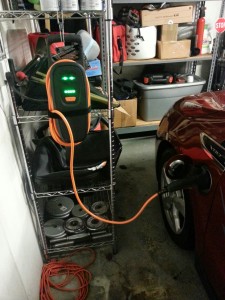 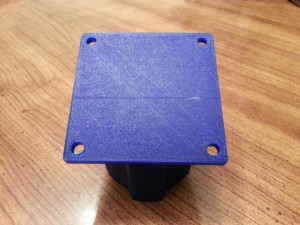 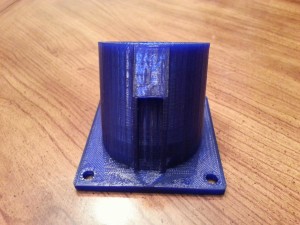 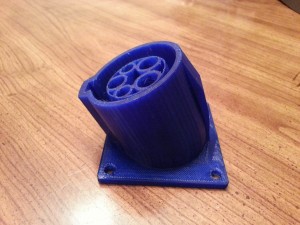 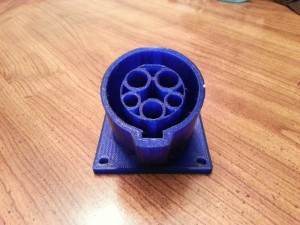 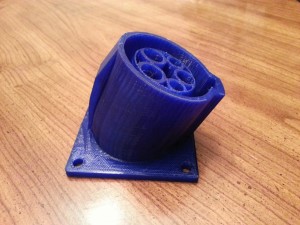 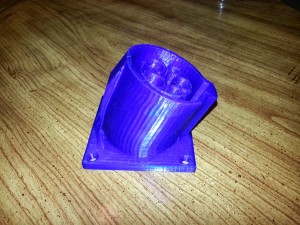 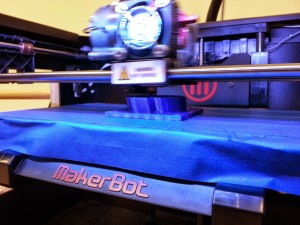 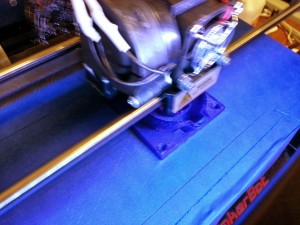 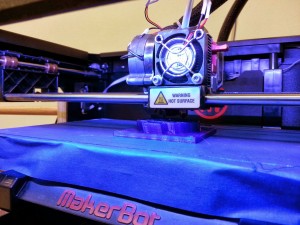 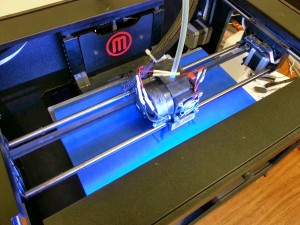 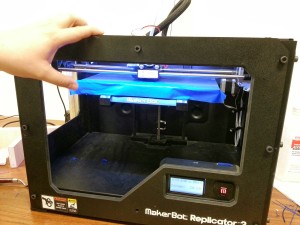 Don’t forget that we will be on site at the Brevard Zoo for their Party for the Planet today from 10-3 talking to local folks about the benefits of driving an electric vehicle.

We hope to see you there!

We know you have been waiting to see where our first community event would be so you can come check out Voltron the Red Chevy Volt! Our “no compromise electric vehicle.” We are happy to announce the wait is over!

This Saturday April 12th 2014 we will be at the Brevard Zoo’s Party for the Planet from 10 AM to 3 PM. Look for our tent, banner, and the red Chevy Volt to be parked directly across from the entrance to the Zoo.  We can not wait to see you there.

For more info about the Brevard Zoo’s Party for the Planet event please check out their websites Special Events Page. The Zoo is located at 8825 North Wickham Road, Melbourne, FL 32940

An oldie but a goodie. Take a look at this electric superbike racing alongside this Citroen electric race car. This is the future of racing!

The team at Space Coast EV Drivers is excited to share with you our new website. Here we will post local EV event info. Can’t wait to see you around town!