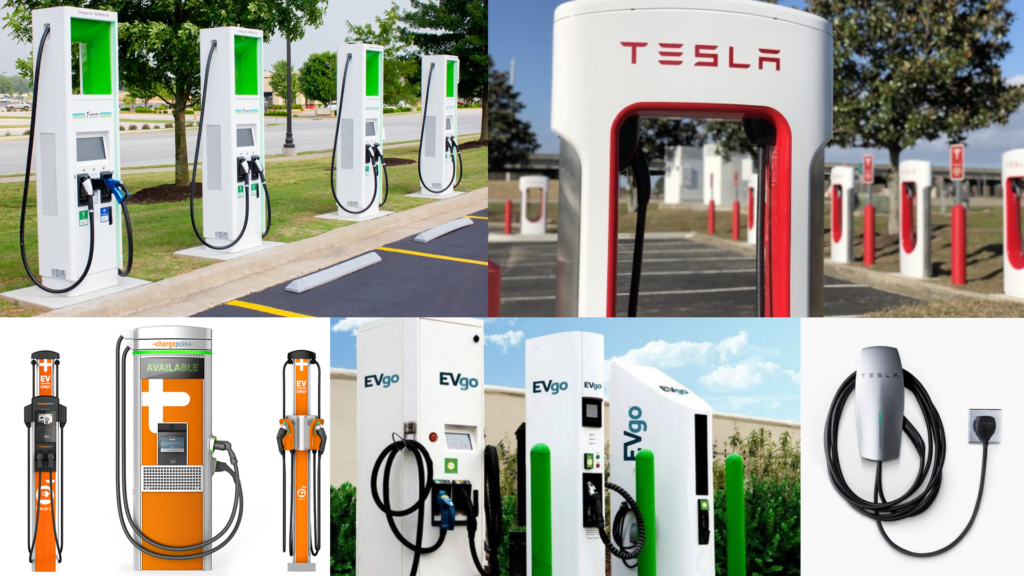 Upon delivery of our EVs we all face the dual concerns of how and where we can charge when away from home. For some it can be as simple as pulling into a charging station and connecting — for example Tesla drivers using Superchargers with “miles” debited to an account set up when the EV was purchased. For all EVs (including Tesla drivers using anything other than Superchargers) it will depend on who owns/provides the charging station, how that station has been equipped to support a variety of EVs, and the EV driver having an associated account configured to allow filling the battery.

Where can I charge the battery?

Every EV will have a display showing chargers in the local area or along the route if navigating. Depending on the brand of EV the display can be comprehensive or a bit sparse. Some will display frequently updated information on how many charging stalls are in a location, and of those how many are available at that moment. Also displayed might be the expected charging power, the costs if any to use the station, and some nearby amenities. But as to detailed user experiences for a station there may be little or no information displayed by the EV.
And so many EV owners use one or more programs as support or even as their primary source for charging station information. Some well-know programs include:
Plugshare www.plugshare.com
ChargePoint www.chargepoint.com
EVgo www.evgo.com
Electrify America www.electrifyamerica.com
A Better Route Planner abetterrouteplanner.com

These and others are available for download in cellphone app stores.
Each offers a variety of useful information for making the EV experience more enjoyable. For example, some will assist by locating and displaying a course to the nearest public charging stations regardless of the network. Some offer access to helpful EV resources and allow the sharing with other EV drivers of experiences at given locations.

Some apps allow filtering to display only those charging stations that work with a specific vehicle. And typically while using an app the driver can initiate charging and pay with a tap of the cellphone on the charging station, and then receive real-time updates

I’ve identified a nearby charger, or one on my route. Can I use it with my EV?

Here is where an app can make life much easier. Let’s say you have a Tesla but there are no Superchargers in the vicinity. Your cellphone app shows a nearby Electrify America charger. Can you charge your battery there?
Maybe yes, maybe no.
If you went directly to that Electrify America charger without first considering some issues typically displayed in an app you could be disappointed with a wasted journey. Electrify America stations connect via the CCS and CHAdeMO plug. There are usually several CCS plugs and only a single CHAdeMO. But Tesla cannot connect to CCS or CHAdeMO directly even using the little adapter that comes with all new Tesla vehicles (that is for the standard J1772 plug – or J plug – for home and destination charging). One would need a CHAdeMO adapter — cost approximately $400 from Tesla.
https://shop.tesla.com/product/chademo-adapter.
Note that no matter the brand of EV in order to use an Electrify America station (for example) you’ll need to have created an EA account and associated a credit card to the account on the EA website or app.
For EA it usually works best to install the app on your phone and use that to start the charger after you’ve plugged in. It is also possible to use a credit card directly on EA chargers but some may find this a bit of a hassle as you can’t just plug in and walk away (like you can with Tesla superchargers).

What about using a J1772 adapter? Who needs it, and where can it be used?

Every EV other than Tesla has a J1772 inlet on the car that allows it to use Level 1 and 2 chargers both at home and at public stations. The little plastic adapter that comes with a new Tesla is used for both of these levels of J plug standard chargers. The level 2 chargers are faster than Level 1 but both use the same J1772 plug. Level 1 is a regular 120V outlet. Level 2 uses 240V “dryer outlet” level power.
Here in Brevard County if you go to Kohl’s at Hammock Landing or the Eau Gallie Library you’ll find some Level 2 chargers that use the J1772 plug, and that’s where Tesla owners only would need the little plastic adapter. These chargers are similar to Tesla’s “destination” chargers where you can plug in and charge while parked for a few hours doing shopping, eating, or maybe watching a movie. A good example of a Tesla destination charger can be found at the Kennedy Space Center visitor complex right up front by the entrance. There’s also a J1772 level 2 charger there for non-Tesla EVs.

And CHAdeMO and CSS? What about those when away from home?

Electrify America only makes Level 3 fast chargers at 50 kW, 150 kW, and up to around 300 kW. Non-Tesla EVs have either CHAdeMO (Nissan Leaf and a few others) or CCS/Combined Charging System (GM, BMW, and most of the others). CHAdeMO is a separate, much larger diameter inlet on the car for a giant-sized plug. CCS is called combined because it adds two bigger ports right under the J1772 inlet for the + and – wires for the very high power direct current so that owners can use the upper inlet for their daily home charging or the slightly larger CCS plug for Level 3 fast charging.
Learn more about plugs here:
https://www.quora.com/Can-other-electric-vehicles-use-Tesla-chargers/answer/Joshua-Pritt

How can I pay for charging away from home?

First, use your in-car display or favorite app to locate those that are free! Tesla “destination” chargers have the same connector as their Superchargers and your home charger. These are usually hooked to a 240V circuit (Level 2). The power typically is given away for free as the charger equipment is normally given at no charge to the destination (hotel, zoo, vineyard, etc.) by Tesla. These chargers don’t have any “smarts” that will talk to the car for billing purposes as do the Superchargers.
Tesla “destination” chargers are basically the same higher power wall charger you’d install at home, just installed somewhere else where you would park for an hour or more to charge while you’re parked there anyway. The “plus” for the business that has set up such chargers is the anticipated additional revenue that more than pays for the little bit of free power given away.
But for those times when the on-board or in-app information indicates that there will be charges, what then? Let’s say you’re using Plugshare and want to access the charger at Kohl’s. The app says that at Kohls you must get an RFID card at customer service, and there is a $1.25/hour charge. How does one pay for the RFID card? In advance? After charging? The app does not say. Plugshare shows the charger is a ChargePoint brand network so if you had your own ChargePoint account and app on your phone then you can activate and pay for the charge yourself without bothering with Kohl’s RFID card.
All non-Tesla chargers are run by third-party networks and manufacturers each of which require user/password accounts on their websites, the storing on file of a credit card to register each month’s total charges, and a free sign-up to get RFID cards in your mailbox. Thus non-Tesla EV drivers will have a glove box or key ring full of these RFID cards, and have to shuffle through them when using a destination charger like that at Kohl’s. Then after locating the appropriate RFID one can tap on the charger to set up billing and start the charge. Today more charging stations are simply using your smartphone to start the charge instead of the old RFID cards.

Clearly it’s much better to have all of this set up many weeks/months ahead of any road trip. It’s much harder while on a trip and sitting at a charger to set up an account over the phone, or use the website to set up on your cellphone. One very experienced non-Tesla EV owner had accounts with ChargePoint, Blink, SemaConnect, EVGo, and Greenlots. There are others, but those were the ones along this driver’s usual routes. Each third-party, non-Tesla charger host site can set whatever price it wants for charging. Some will set the price at zero and give the power away for free because they know that the extra dwell time while customers wait for a charge will drive new business, and those customers might stick around for an extra coffee or dessert at a restaurant.
One owner recently reported that he had “topped-up” at The Avenues Viera Level 2 charger. After getting a cup of coffee his ChargePoint app reported “20 miles, 53 minutes, 5 kWh $0.”
Other locations will try to recoup the costs of the charger by adding a few pennies over what they are paying for power. But it would take years to pay off going by that alone, so it’s probably not the wave of the future.
Most people can’t think of a charger as anything but a gas station pump that happens to pump out electrons instead of gas. “Pay with Plugshare” was a new feature added recently trying to make it easier to pay for the charges without the need for setting up all those separate accounts. But not all third-party networks have signed on so it’s yet just another confusing way to pay for it all.

How do “destination” chargers differ?

Tesla “destination” chargers are built to use a wide range of input amps. So it will be different for each host depending on how the electrician wired it up vs how much capacity there was in the host’s breaker box. For example, a small bed and breakfast might have at most a 30 or 40 amp breaker. But a large hotel might have 80 amp service making it almost twice as fast as the “bnb,” but still much slower than the Superchargers yet at the same time much faster than Level 1 charging on a 120V outlet.

Remember, if you have any questions about EVs, owning and driving EVs, and charging EVs, you can email us and ask real EV owners that have been driving almost every make and model since 2011.